Korg Volca synthesizers have two 3.5 mm jacks to sync with other musical instruments. One jack is used to receive the sync signal and the other to send the sync signal. In this article, we will examine the Sync Out signal. 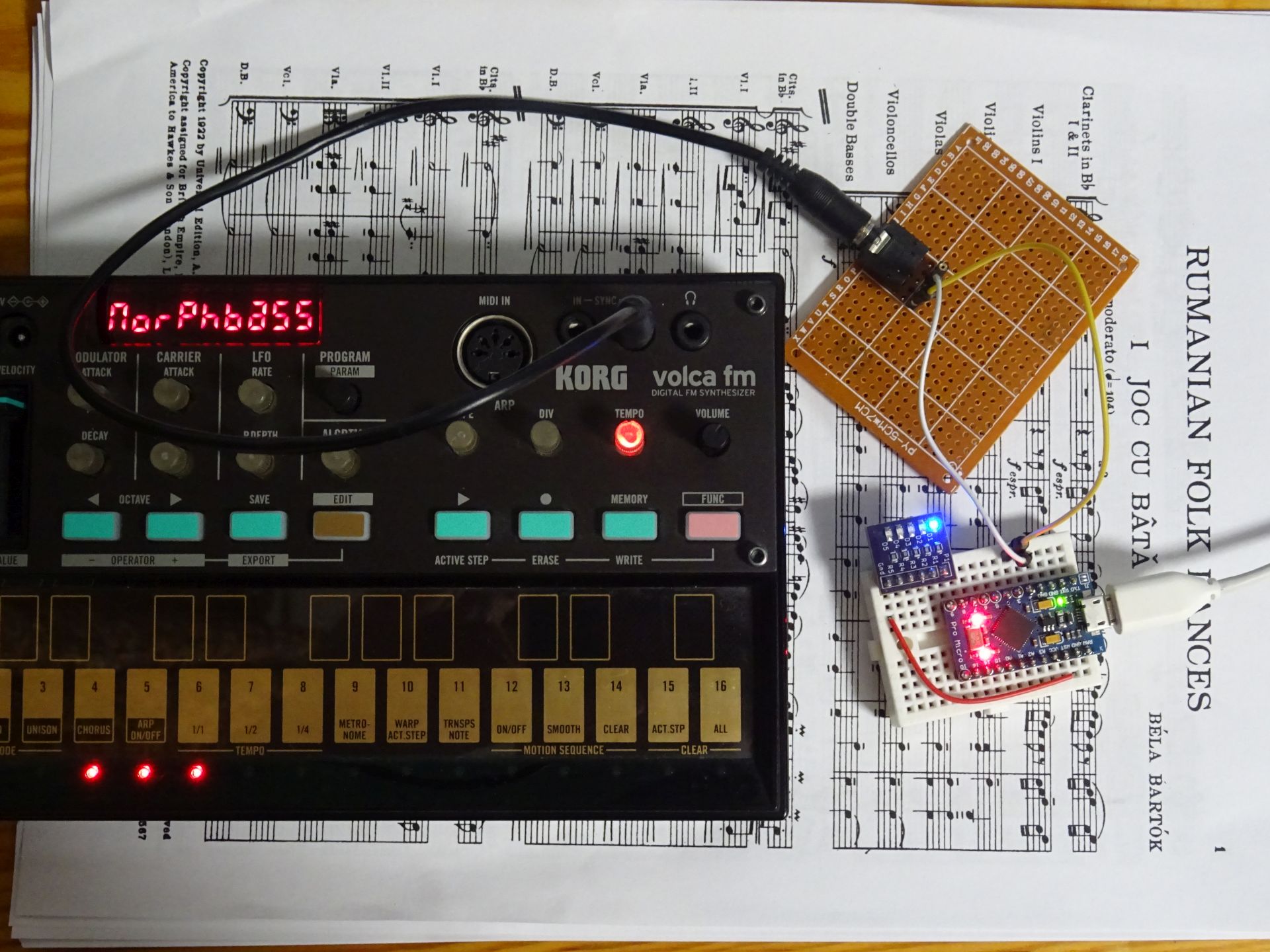 The Sync Out signal has the shape of 5 V pulses with a length of 15 ms. Pulses are transmitted with a resolution of 2 PPQN (pulses per quarter note). That is, two pulses are sent during one quarter note. This is relatively a little because, for example, MIDI uses 24 or more PPQNs. But Korg Volca synthesizers contain a simple sequencer with sixteen positions for sixteenth notes, so we can calculate that 8 pulses will be sent during one sequence.

Mono jacks should be used for synchronization, but they are less accessible and so the stereo jack will serve just as well.

It can be seen in the figure that after switching on, 5 V will appear on the output and will be there until transistor Q12 turns on. This is likely to happen after the microcontroller is initialized in the synthesizer. Therefore, when the synthesizer is turned on, the initial long pulse appears. You can watch it in the attached video, where the whole course of pulses on Sync Out is clearly visible.

It is clear from the wiring diagram that we can connect an LED and a resistor to the Sync Out output. This will create a connection between 5 V and GND and the LED will be lit during the pulse. Although only for 15 ms, but that is enough for the human eye to notice short flashes. It is not clearly visible in the photo, but one jack is connected to the Sync Out output and the other end of the cable is connected to a socket which is soldered to the perfboard. I only have 5-pin stereo sockets. The middle pin is GND and both side pins are used to connect the left and right channels. The remaining pins are connected to the side pins when the jack is not plugged in. When the jack is plugged in, they are disconnected. This is used, for example, to disconnect the signal from the speaker as soon as the jack is plugged in from the headphones. In our case, we don't need them. 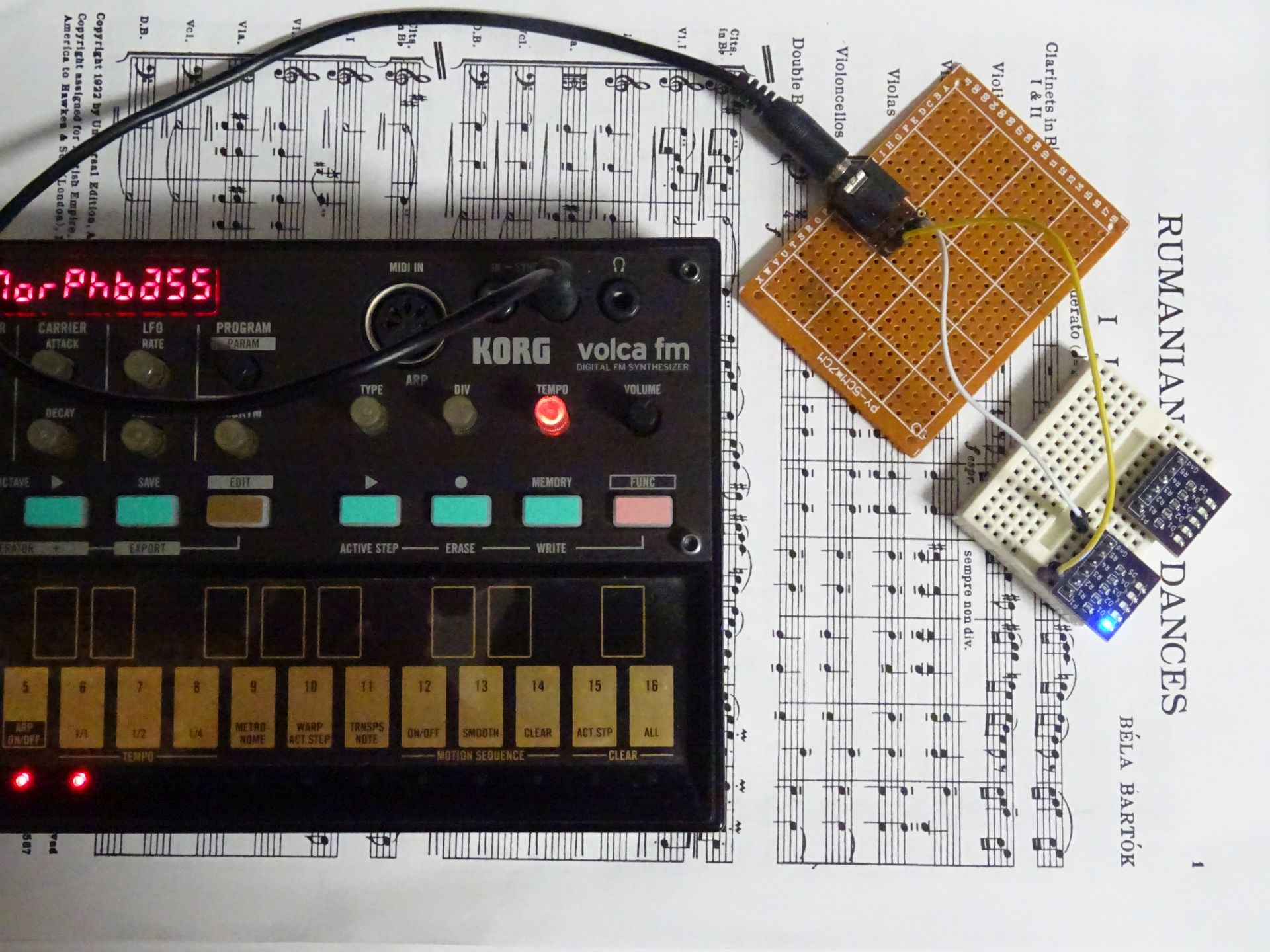 I used Arduino with this attempt. I connected it according to this scheme. Pulse from Korg Volca arrives at pin 3. This pin is used intentionally because it allows you to respond to pulses by interrupt handler. 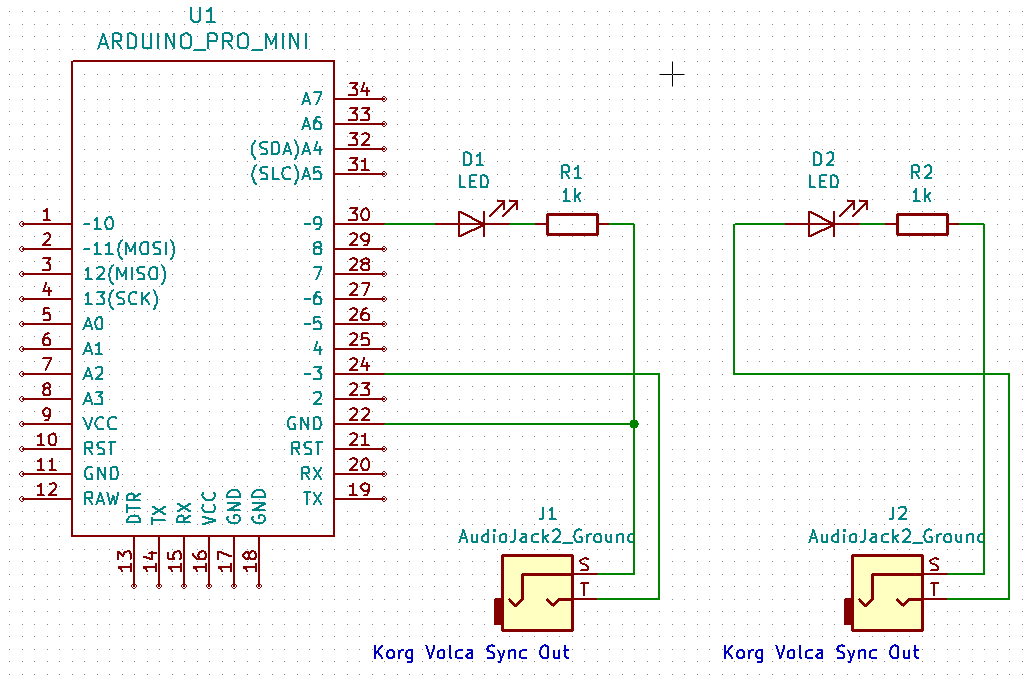 The program is simple. Use the function attachInterrupt to connect the interrupt handler. It is also advisable to use the digitalPinToInterrupt macro, because there are different pins on different Arduinas that respond to an interrupt from an external signal. This way, the example will work for both the Arduino Uno and the Arduino Micro, which I used in the example. Because we are responding to a CHANGE interrupt, we must use the digitalRead function to read the current value on the pin. And we just turn it on on the pin on which the LED is located, so that we can see the LED flash at the moment of the incoming pulse.

In the attached video you can see the whole experiment and you will see the whole behavior of the Synch Out pulses from the Korg Volca synthesizer.