This project was created by accident. I was thinking about the new NeoPixel project and looking at the old source code. I loaded a fire simulation program into Arduino and accidentally caught a NeoPixel Ring in my hand in a dark room. And I was amazed to see what an interesting image was created on my hand. Then all you had to do was take a camera and film different hand positions and the NeoPixel Ring.

An image without sound does not have such an effect on a person, so I tried to combine the music I wrote for my version of Conan the Barbarian. In the music, a sequence of 8 tones is rhythmically repeated, which is highlighted by sharp blows on the timpani. The chamber string orchestra is perfect for this type of film music. The combination of cello and double bass, which play in unison, is the basis of the tension in many films, which is accompanied by a simple melody.

I added another video to the film Hunger Games, in which I learned the technique of orchestration. It's the same principle for creating tension in the scene. It's the scene from the beginning of the film, when Katnis signed up for games instead of her younger sister. When you look at all three videos, you will understand what I wrote about in the previous paragraph.

We will need the following components:

Protective components are necessary in order to not damage NeoPixel Ring. Details of protection are in article on powering these diodes. 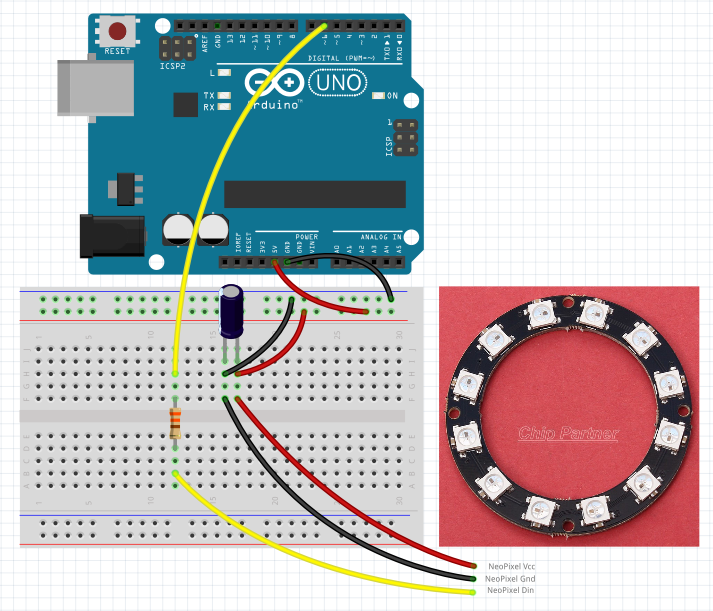 The picture shows a ring with 12 diodes. Ring with 24 diodes is not very different from it and it is therefore possible to use a smaller ring after minor changes in the sketch.

The source code of the program is located on the GitHub server.

I created the music in Ableton Live 10 using Spitfire Studio Strings. In the text you will also find hyperlinks to sheet music from MuseScore.