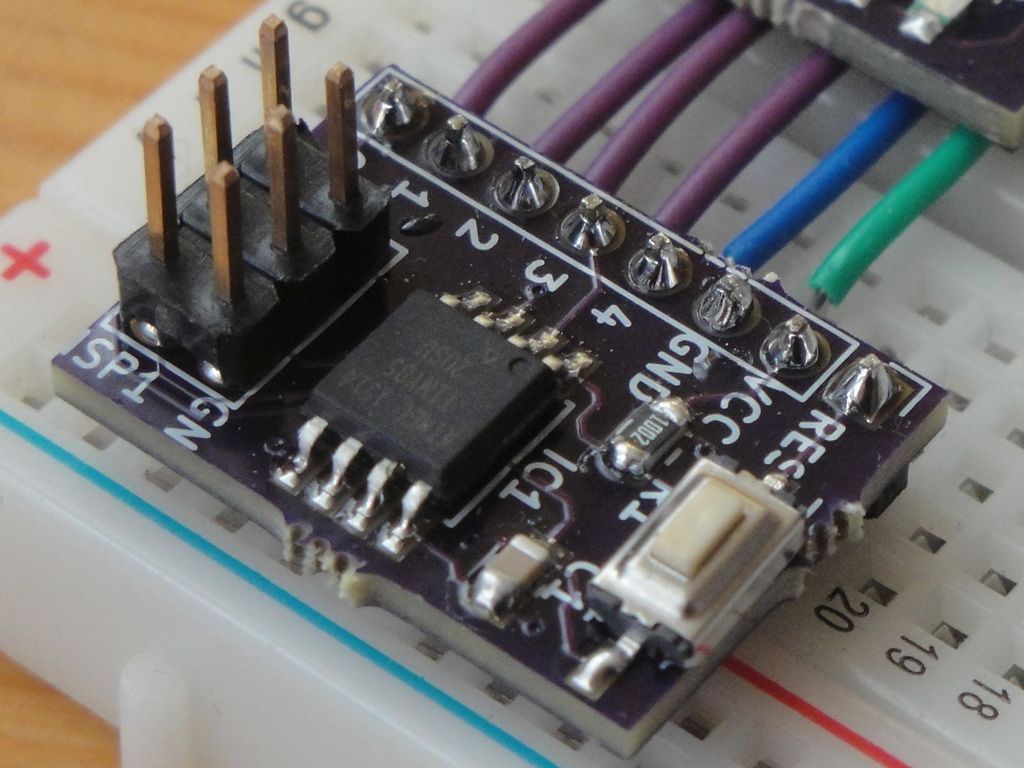 Why use ATtiny85 instead of a full-fledged Arduino?

The main reason is the price. You can buy the microcontroller for the Euro, and when something happens, nothing happens. In addition, it is simple to made circuitry that is robust, can be connected to a higher voltage (using a voltage regulator) and you can easily control other circuits with the digital pins.

How to program ATtiny85 using the Arduino can be found in a separate article Arduino as an ISP programmer. There is also the second option that you can lay down a development board and program it using USBasp.

In order for the microcontroller to be programmed, support must be installed in the Arduino IDE. The procedure applies to IDE 1.6.4 and above:

The previous core is good for the basic programming of ATtiny85. However, if you want to use more options of the microcontroller, it is advisable to look for more redesigned cores. They support the changing of many parameters. For example, changing fuse settings, different clock sources, and code optimization during the translation.

Five digital pins are available in the default settings. It is possible to switch the microcontroller to the state when it uses the last pin instead of the reset, but it is a one-time issue and it is no longer possible to program it using the Arduino. That is why we will not even take this option into account. The individual pins are controlled as follows:

There are three pins available:

There are three inputs available:

There is a fourth analog pin, but it is on the same pin as RESET and its use is not easy.

ADC conversions provide more choices and those are examined in a separate article of the ADC.

Working with EEPROM works just like in the usual Arduino. If you want to make programming easy, find the inspiration in the article on the practical use of EEPROM.

Adjusting the speed of the microcontroller

If there are no serious reasons for this, leave the microcontroller at the 1 MHz factory setting. If the speed is important, it can be switched to 8 MHz and in the case of extra speed requirements it is possible to go up to 20 MHz but only at the cost of pins 3 and 4. Speed setting is described in the article Arduino as an ISP programmer.

The information on the occupation of pins 3 and 4 is not entirely correct. There is a possibility to switch ATtiny85 into a mode that even at higher speed uses an internal oscillator. It is called PLL and can be used to achieve higher speeds. The easiest way to do this is to use the core ATTinyCore and set it in the menu. Be sure to use the menu item Burn bootloader.

Again what is in the previous paragraph. To add work, you can program it with low-level functions. But at ATtiny85 we have 8 kB of memory available, and it's enough for regular size programs. That's why it's much more convenient to write digitalWrite than to worry about bitwise port operations.

Only when it comes to speed or more significant memory savings, optimization techniques are needed. The old programmer's rule is that the customer does not really care how many years you've spent the program for flashing the LED. When it works, the customer will never see your source code.

List of projects with ATtiny85. If you want to program the microcontroller more, it's a good idea to build a development board. In projects, you can find the boards in the DIP design and the boards with SMD components. The LED strip dimmer was my pilot project I was learning. But surprisingly, this model of dimmer uses about 10 of my friends on my boards and an unknown number of hobbyists who have been inspired with this project.

On these pages I never wrote about Arduino directly for beginners. The reason was that there are enough examples of Arduino on the Internet that will teach you the basics of programming. With the ATtiny85 microcontroller it's different. Examples are few and difficult to find examples that would be simple enough. I'm trying to do this in this series and describe the topics and examples I do so that after reading a series of these articles a less experienced user could program these small microcontrollers.

Our baby was born two years ago and his most favourite words are the car and blink. Let's make this blink with the ATtiny85 microcontroller. The Blink program is the most basic program for Arduino, where you will learn the basics of microcontroller pins. In this article we will take over these basics and add some extras to them.

In the previous article, I forgot to mention it. The ATtiny85 microcontroller is factory-set at 1 MHz. In this article we'll explain how to change this setting and set a higher frequency with fuses.

Buttons are simple parts that you can use to communicate with the microcontroller. Typically, microswitches are used, which can also be found in conventional consumer electronics. In today's article we will explain the basic use of the buttons and we will program a simple state machine in which we will have to make a button debounce.

ATtiny85 has 3 PWM outputs. They are located on pins 0, 1 and 4. In this article we show how PWM is used. PWM (pulse width modulation) is an acronym for pulse width modulation of the signal by means of a change of the pulse width. It is an efficient way to control the electrical power delivered to the load. Arduino users meet this term when they control the brightness of the LED or the fan speed.

Different ways of programming a microcontroller.

The USBASP programmer is used for convenient microcontroller programming. If you are using Windows 10, you will need to use signed drivers so that the programmer works. I have prepared a video for you where the entire installation procedure is explained.

Other articles that could not be categorized.

The birth of the second child was an inspiration for this project. We needed a highly portable source of light to which it is possible to smoothly adjust the brightness. I took advantage of the Bambíno and ATtiny13A project and created a LED light project that is powered by a 4.5 V battery. This LED light is controlled by ATtiny85 microcontroller, but the program is also compatible with ATtiny13A.

The ATtiny85 microcontroller has two 8-bit timers. Using them can be controlled dimming of LEDs. 8 bit is not enough if you want to have a brightness change adapted to the human eye. Gamma correction causes visible jumps in brightness, especially at low brightness. The ATtiny85 microcontroller can with timer 1 produce even better resolution. In this article, we'll show you how to do it.

ATtiny85 development board on a breadboard

I recently introduced a SMD development board for the ATtiny85 microcontroller on these pages. In today's article I would like to show it in action. This development board has been incorporated into my other boards that I use on breadboard. I made them so that I do not need to constantly insert a large number of wire leads into the breadboard. Their quantity is reduced to a minimum. It is also visible on the illustrative photo.

Two years ago, I programmed a fire simulation for Arduino Uno. In this article, we try to do this simulation using the ATtiny85 microcontroller. To prevent the program from being exactly the same, we modify the simulation slightly to set the flashing of the flame.

Little Petrík is no longer Bambíno and the click of the switch is no longer fun. Cica Mica came to his place, and she likes clicks on the switch.Will we repeat the success of the first box in which was the ATtiny13A? We do not know. But now I've used ATtiny85 and a refined program that randomly exchanges 4 LED sequences.

For several months I am writing series for beginners on ATtiny85 microcontroller. You can use this microcontroller as a miniature Arduino replacement. But miniaturization also brings problems. The microcontroller has few pins, and it is not always possible to use a serial port on it. That's why I chose this small 7-segment display to show the simple information in the next sequel. You can easily buy the display in Chinese e-shops. To familiarize yourself with the display, it is advisable to read the article Arduino and the TM1637 display.

In this article we will describe the project of a miniature thermometer. We will use the ATtiny85 microcontroller and the DS18B20 integrated circuit. The result will be displayed on the TM1637 display. The connection is simple and the whole project can be built on a breadboard.